MAME: Esselte 100 and other Didact designs


Now you can try how using a computer at the beginning of the 1980ies felt like. At the time they all suggested that you had to learn programming or at least use the prompt and usually they had a BASIC interpreter built in. Esselte 100 had only 12Kb of ROM to start with which was later upgraded to 16Kb.

Thanks to some dedicated people at elektronikforumet.com, a swedish forum for electronic enthusiasts, I got hold of schematics and ROM:s so I could start my Didact project. Esselte 100 is a Didact design and here is how you can run it in MAME on a 64 bit Windows 7 computer:

Just press enter on the informational messages that pops up and you should now have a prompt! 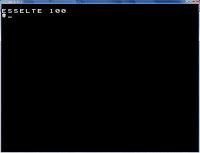 From here you can explore the wonders of BASIC. 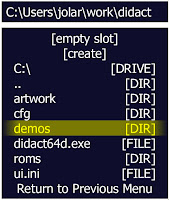 In the file dialog navigate into the demos folder and select a BASIC demo. Once a wav file is selected the "cassette" is loaded an ready to be used. 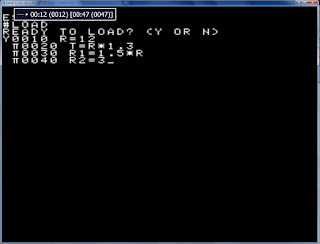 To load the demo from the cassette issue a 'LOAD' command at the Esselte 100 prompt. The Esselte 100 will ask you if you are ready and of course you are, press 'Y'. To start the loaded cassette press F2 and a counter will appear showing you where on the tape you are.

Under 'Tape Control' in the main menu there are additional actions that you can take in order to navigate the tape in case you have several saved assets at the same cassette or want to create a new one. More on the latter below.

While loading the cassette the Esselte 100 displays what it loads and when done it will clear the screen and sit at the prompt awaiting commands. Now you can look at the code by issuing a 'LIST' command and of course run it by issuing a 'RUN' command:


Saving your own BASIC program is similar but you need to prepare a cassette first. This is done by selecting [create] in the file dialog shown above, use file name of your choosing and append a .wav suffix, because MAME will actually generate a wav file.

In the 'Tape control' menu there is 'record' option and once you have pressed it a wav file is being written to file so quickly exit to the Esselte 100 prompt and issue a 'SAVE' command. Shortly, well 300 baud can take a while, you precious work has been saved! :) Press F2

If you write a nice Esselte 100 demo and want to share it, let me know and I can add it to the distribution. If you sit on original Esselte 100 cassettes, dump them to WAV files through the microphone input on your computer and then try to load them into the emulator as described. I am very interested to know how that works, it is not yet tested. You can also contact me and I can do it for you.

Didact Laromedelsproduktion was started in Linkoping in Sweden by Anders Andersson, Arne Kullbjer and Lars Bjorklund.  They constructed a series of microcomputers for educational purposes such as "Mikrodator 6802", Modulab, Esselte 100 and the  Candela computer for the Swedish schools to educate the students in assembly programming and BASIC for electro mechanical applications such as stepper motors, simple process control, buttons and LED:s. Didact designs were marketed by Esselte Studium to the Swedish schools. The Candela computer was designed to be the big breakthough and developed by Candela Data AB, "a Didact Company". The Candela system was based around a main unit that could run OS-9 or Flex and a terminal unit that had a propietary software including CDBASIC. The Candela system lost the battle of the swedish schools to the Compis computer by TeleNova which was based on CP/M initially.  Later both lost to IBM PC as we know. Candela Data continued to sell their system to the swedish industry without major successes despite great innovation and sprit.
Upplagd av Edstrom kl. 06:16